Euro Sinks to a 20-Year Low 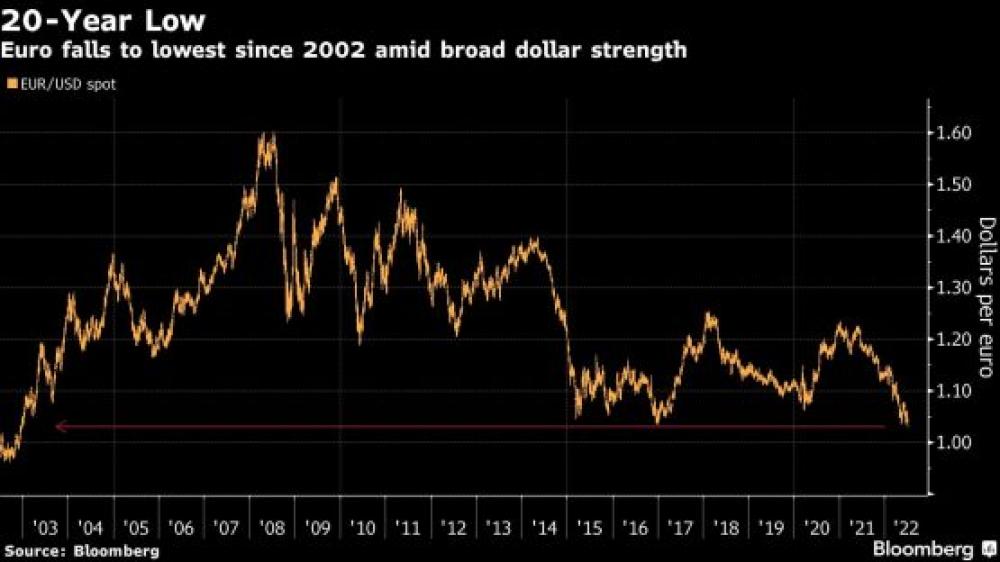 The euro depreciated below $1.03, its lowest level since December 2002, as weak economic data, and rising gas prices strengthened the prospect of a widening monetary policy gap between the ECB and the US Federal Reserve.

An energy crisis in Europe has obscured the outlook for growth in the Eurozone, making the ECB's task of taming record levels of inflation more difficult. The annual inflation rate in the Euro Area escalated to a new record high of 8.6% in June of 2022, exceeding market expectations.

ECB President Lagarde said she believes it is unlikely that the Eurozone will return to an environment with low inflation while confirming a 25bps rate hike in July after multiple ECB policymakers called for a steeper increase. Contrarily, the Federal Reserve is expected to continue with fast rate hikes and raise the fed funds rate either by 50bps or 75bps this month.

Economists said the risks of Europe falling into a recession were heightening after another steep 17% rise in natural gas prices in both Europe and Britain compounded with the growing inflation.
Concerns about how the European Central Bank will react were unsettling after German Bundesbank chief Joachim Nagel had lashed out at the ECB's attempts to protect highly indebted countries from surging borrowing rates.

"It will continue to be very difficult for the euro to rally in any meaningful way with the energy picture worsening and risks to economic growth increasing notably," said MUFG's head of global markets research Derek Halpenny in an interview with Reuters.

The dollar's strength, meanwhile, sent the yen back down toward a 24-year low. It was last at 135.79 per dollar today.

To top up the gloom, futures contracts tied to TTF, the European wholesale gas price, went up almost 5 percent to a four-month high as the news broke out that Norway’s Equinor was temporarily shutting three oil and gas fields after workers went on strike. Norway has issued an alert that gas exports to the UK could be halted this weekend if the situation exacerbates.