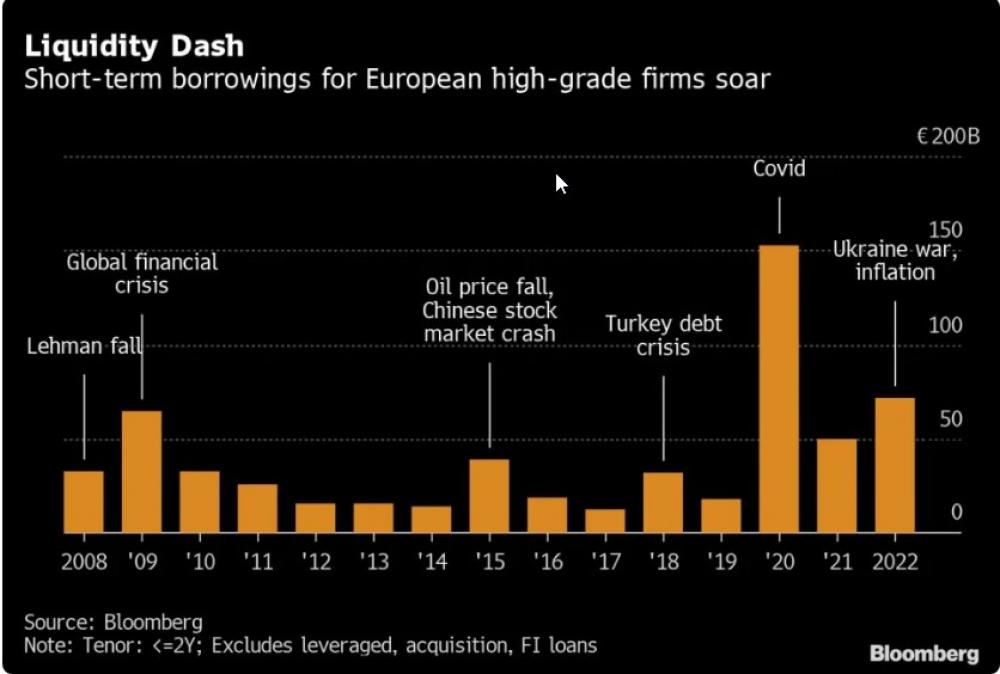 European high-grade companies are taking out credit facilities maturing in two years or less, significantly shorter than the average five-year term of conventional loans. According to Bloomberg-compiled data, such companies have sealed €76 billion ($75 billion) of short-term financing this year, which is the second-highest on record after the €153 billion extended in 2020. The widespread uncertainty and market volatility have also pushed some firms toward taking out short-term loans to cover looming debt maturities this year and disrupted the ability to raise funding through bonds.

Investment-grade rated Dutch medical equipment maker Koninklijke Philips NV got a €1 billion loan with a 12-month term “in light of recent developments and market volatility”, as reported by Bloomberg. Other firms seeking short loans include Enel SpA, Daimler Truck AG and Swiss energy firm Axpo Holding AG. Borrowings from companies within the energy and utilities sector make up two-thirds of the full-year tally, while earlier in the year commodity traders rushed to raise such funds.

The increase in emergency funding is an alarming sign, as central banks try to combat surging inflation. Last month European Central bank announced the highest in a decade, 75-basis-point interest rate hike — its third consecutive increase this year — while also scaling back support for European banks.

ECB tapered the subsidy it provides to commercial banks through 2.1 trillion euros worth of ultra-cheap three-year loans called Targeted Longer-Term Refinancing Operations, or TLTROs, and stated that TLTRO interest rates will match the deposit facility rate.