The complexities of shrinking the Fed's balance sheet. 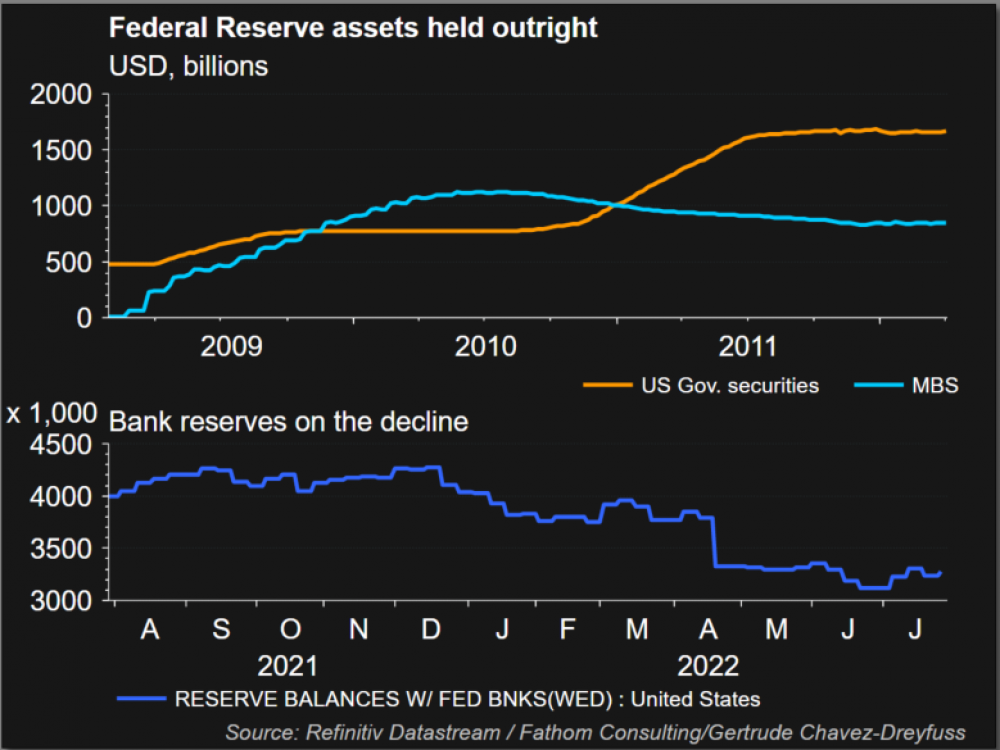 As the quantitative tightening (QT) program is set to shrink the Fed's balance sheet by $95 billion in September, experts warn of adding further pressure on an economy that may already be in a recession.

The Fed started tapering its $8.9 trillion balance sheet in June reckoning to keep the reduction at $1.1 trillion a year over two and half years.  But the impact a reduced Fed balance sheet could have on the liquidity in the market and equity prices raise concerns among financial market professionals.

Peter Tchir, head of macro strategy at Academy Securities, discussed Federal Reserve policy and the outlook for the US economy on “Bloomberg Surveillance" where he compared QE and QT to Newton’s cradle, warning that the prices of assets on the markets will decline.

“I think QT behaves very differently than rate hikes,” Tchir said. “I think QE really helped inflate all asset prices. I have always talked about this as being like Newton’s cradle, where you drop the ball at one end, and it knocks all these things, and the ball at the other end moves. So, if that is what QE did and really pushed out asset prices - especially on the riskiest assets - I think you are going to see the reverse of that.”

Strategists at Bank of America wrote in a note to Bloomberg the reduction of the central bank’s balance sheet along with the interest rate hikes could knock 7% off the S&P 500 index next year.

Research presented last week at the annual conference in Jackson Hole by a former Chief Economist at the IMF Raghuram Rajan provided a pessimistic assessment of the quantitative tightening and its ability to shave off the Fed’s balance sheet. The researchers found that commercial banks do not reduce borrowing once the Fed has started to shrink its balance sheet.

The concern is that the outflow of deposits from banks into money market funds could reduce bank reserves at a rapid pace, which could impede lending activities to financial markets and the broader economy. Investors are effectively taking deposits away from banks and putting them into government money market funds, which invest mainly in Treasuries and repos. These money funds, in turn, channel the cash to the Fed's overnight window.

Fed's reverse repurchase facility (RRP) led by money market funds has drawn in a broad range of market participants, helping eliminate excess liquidity in the financial system. According to Reuters, by the beginning of August, the volume at the Fed’s reverse repo window has topped $2 trillion for thirty-nine straight days. Barclays expects daily reverse repo levels to hit between $2.8 trillion and $3.0 trillion by the end of the year.

The decline in bank reserves could also prompt a surge in the repo and effective fed funds rate, which was the case during the last QT in September 2019 when bank reserves ran down due to heavy withdrawals for tax payments and settlement of Treasury purchases at auctions. That forced the Fed to reverse its monetary policy course and replenish the banking system with liquidity.

“If the past repeats, the shrinking of the central bank’s balance sheet is not likely to be an entirely benign process and will require careful monitoring of the banking sector’s on-and off-balance sheet demandable liabilities,” said the paper by the former IMF executive.