Hard to Trade In Treasuries

Market players express concern over the dwindling liquidity of the Treasury bonds. 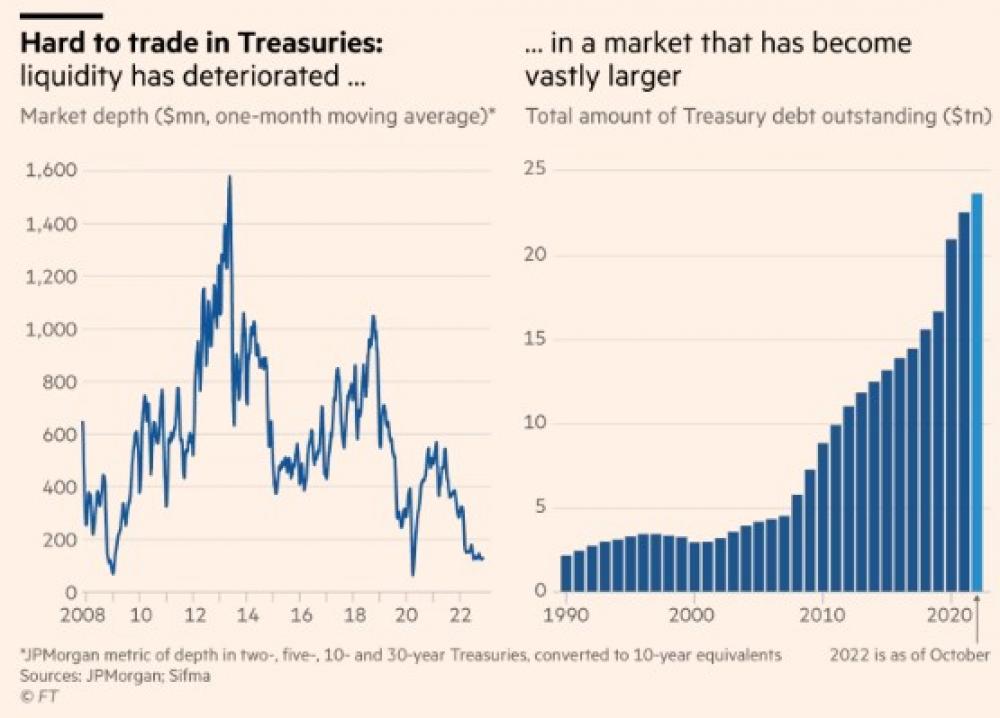 Treasury yields, which move with interest rates, have been much more volatile than usual as the Fed has started implementing an aggressive tightening policy. Amid so much uncertainty, some evidence suggests that it has become harder and more expensive to trade Treasury bonds.

U.S. Treasury bonds are a key benchmark of the global financial system, but some signs are creating concern that liquidity in the Treasury market has been deteriorating. Back in October, Treasury Secretary Janet Yellen expressed concerns about the potential for a breakdown in the trading of US Treasuries.

“We are worried about a loss of adequate liquidity in the market,” Yellen said in answering questions session following a speech in Washington. “The balance-sheet capacity of broker-dealers to engage in Treasuries market-making hasn’t expanded much, while the overall supply of Treasuries has climbed,” she pointed out. Since the end of 2019 Treasury debt outstanding has gone up by nearly $7 trillion.

Heightened volatility tends to lead to reduced liquidity in the market. However, some observers of the US Treasuries market believe this relationship has also started shifting in the opposite way, where illiquidity is now making an impact on the volatility.

“In recent months, liquidity in the Treasury market has deteriorated further”, the director of economics at hedge fund DE Shaw Brian Shack said to Financial Times. “The recent development is more concerning, as it seems as if market functioning has become a bigger source of risk, rather than just reflecting the uncertain fundamental environment,” said the executive.

Other concerns have been raised as well. Stricter regulations were adopted after the 2008 financial crisis that required banks to hold more reserve capital to cover potential losses on government securities. That provision discouraged banks from acting as intermediaries on the financial market, and boosted the activity of NBFIs – non-banking financial institutions such as insurers, pension funds, hedge funds, and other financial vehicles that provide corporations and individuals access to funding from liability-driven investments (LDI), which typically have higher leverages and are more exposed to liquidity risks than banks in times of volatility and high-interest rates. In addition, in an attempt to cool the economy and fight inflation with quantitative tightening, the Federal Reserve and other central banks are either selling Treasuries or no longer reinvesting them, which leads to fewer market participants, and increased volatility.

“You’re worried about the fire sale, the situation where some selling comes in and because there’s not enough demand you have more selling and more selling and you get kind of a spiral,” Donald Kohn, a former vice chair of the Federal Reserve’s board of governors and now a senior fellow at the Brookings Institution said to Washington Post. “I don’t think anyone sees that right now,” he added.

On the other hand, many economists and financial analysts say concerns about market weakness may be exaggerated, as over $600 billion worth of U.S. government bonds still continues to be traded globally every day.